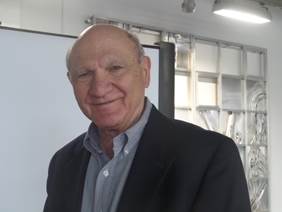 Peter Calaboyias, accomplished educator, sculptor, painter, and jeweler, and more importantly beloved father, grandfather, brother, uncle, and friend, passed away on November 27, 2022, surrounded by loved ones. Born on the island of Ikaria, Greece, on February 16, 1940, he was a loving Baba to his daughters Dianna (and Bill) Wyrick and Jackie (Chris) Fox; devoted Papou to his grandchildren Elias, Panorea, Peter, Eleni, and Zacharias, and cherished companion to Elizabeth Beisel. Peter is also survived by sisters Mary (Michael) Raich and Sophia (Yianni) Facaros, many nieces, nephews, great-nieces, and great-nephews, and Panorea Bouris, who he married in 1964 and with whom he shares his daughters and grandchildren. Peter was preceded in death by his parents, Zacharias and Demetra (Pavlos) and his older brother and sister Vasili Calaboyias and Anna Shape.

Before Peter’s birth, his mother traveled with her two children from Cambridge, Ohio, back to Ikaria to visit her family. It was the summer of 1939, and the outbreak of World War II made it impossible for the family to travel back to America, so Peter was born on the island. In 1942, Ikaria was invaded by German/Italian forces. Demetra escaped to Turkey in a rowboat with her children from where they made their way to Cairo, Egypt and ultimately the Belgian Congo, where they lived in a refugee camp for several years. In 1947, after first returning to Ikaria, they settled in Johnstown, Pennsylvania, where Peter met his father for the first time.

Peter graduated from Johnstown High School in 1958, received a degree in art education from Penn State University, and later obtained a Master of Arts degree from Indiana University of Pennsylvania. He began his career as an art teacher in the Pittsburgh Public Schools, later teaching at the Community College of Allegheny County and Grove City College, while also developing his reputation as an innovative and talented sculptor. Peter was honored with his first solo exhibition at the Carnegie Museum of Art in 1972, and since that time, he has had multiple additional exhibitions in Pittsburgh as well as many more in other U.S. and European cities. His commissions include countless paintings, stainless steel and bronze sculptures, and artwork in other media, which are found in both public and private collections at home and abroad. His most internationally recognized work may be “Tribute,” a bronze work of art which was commissioned for the 100th anniversary of the modern Olympic games in 1996. Tribute remains in Centennial Park in Atlanta, Georgia and is seen by many thousands of visitors each year.

In the early 2000s, Peter finished restoring a family home in his village of Karavostamo, Ikaria. Since that time, he has spent as many as six months a year living in Ikaria. His children, grandchildren, extended family, and friends have all gotten to share the joy of being in Ikaria with Peter, where they have made cherished memories. The beautiful blue of the Aegean Sea and the stunning sunsets from his balcony influenced Peter’s art in his later years, which is bursting with the vibrant, joyful colors of his native Ikaria.

May his memory be eternal.