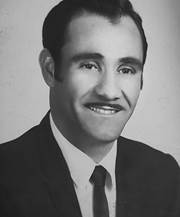 It is with great sadness that I share the news of the passing of long-time Chapter Icaros member, Jeremias (Jerry) Gemellas. He served as past Chapter Icaros President and VP, and worked tirelessly on behalf of the Chapter, always there to lend a helping hand when needed. He will truly be missed by us all. Below is the obituary, including service details, for those interested.

Jeremias Emanuel Gemellas, born December 11, 1930, beloved husband of Garifalia “Litsa” Gemellas (née Georgopoulos), passed away peacefully of natural causes at his home in Verona, PA on July 18, 2022 at the age of 91.

Jeremias was born in Arethousa, Ikaria, Greece, and was later raised in Chrysostomos, Ikaria, Greece, with 4 siblings. His father passed away when he was 9 years old, so Jeremias left school early to work various jobs, helping provide for the rest of the family during World War II, as many families endured great hardship and tragedy during that time.

Jeremias had served in the Greek military, and after he was discharged, he started working on fishing boats and eventually on cargo and passenger ships for over 11 years, traveling around the world. He emigrated to the Pittsburgh area in 1966 to pursue the American Dream.  He met and later married Litsa in 1970 and had two sons with her.  He began working at Edgewater Steel but switched to becoming an industrial painter.  He started at Avalotis Corporation when it was founded as a new company and stayed until his retirement in 1990, working for and among many close friends for decades as a proud member of IUPAT. Jeremias was a very active member in the Greek Orthodox Church and the Pan-Icarian Brotherhood of America, serving as a past Pittsburgh Chapter Icaros 7 President and Vice President.

An industrious handyman, Jeremias loved to work on projects around the house, tending his gardens, making homemade wine, and playing Greek tunes on his bouzouki. He enjoyed traveling back to Greece in the summer and had a deep love for his family, friends, and community in Verona and Ikaria.  Boisterous, outspoken, and larger than life, he had developed so many deep friendships with so many people because of his compassion and love for others. He was always the friend who was ready to help when needed, expecting zero in return.

Jeremias is survived by his loving wife Litsa, sons John and Soterios, two other children – Emanuel and Evangelia – from a previous marriage, two grandchildren, Vangelis (son of Evangelia) and Andreas (son of Emanuel), sister Vasilia (Emanuel Smyrnakis), brother-in-law Andreas Georgopoulos, sister-in-law Panayiota Kotsovolos, and many nieces and nephews. He was preceded in death by his sisters Maria (Kouvaris), Stella (Orkoulas), and Elpida (Glaros).

May his memory be eternal and may his soul be in a place of rest and repose.