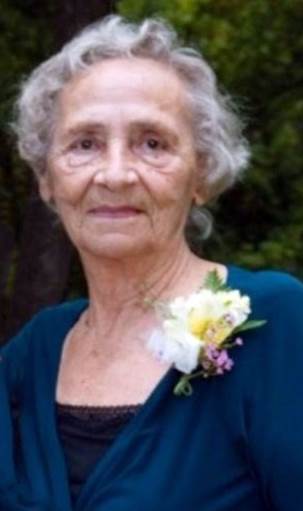 Chickie was born in Panagia, Ikaria in 1926 to Eleni (Moraitis) and Nikolas Mavros. Chickie was orphaned at the age of 4 and raised by her Uncle George and Aunt Despina Moraitis, along with their children Evangelia, Manoli, and Argyri, who considered Chickie their sister.

Chickie came to American with a group of young Greek women as war brides. On her first day in America, New Year’s Eve 1947, she went to Time Square with relatives to watch the ball drop at midnight. A few weeks later while visiting her aunt in Brackenridge, PA, she attended a birthday celebration for Christ Apostolos, and the rest is history. They met on January 13, 1948, he proposed the following week, and they married February 22, 1948. They raised their two daughters in Natrona Heights, PA, and upon Christ’s retirement, he and Chickie moved to Ikaria, Greece in 1991. There they built a lovely home in Panagia, in which they enjoyed hosting their company, and their days often included spirited games of pinocle. They were happily married for 55 years, until Christ’s death.

Chickie was a devoted mother, grandmother, and great-grandmother, and a wonderful friend to all who knew her. She enjoyed being out each day, visiting friends, playing cards while smoking and drinking coffee, cooking, baking, reading, and gardening. Chickie was a Sunday school teacher at the Annunciation of the Virgin Mary Greek Orthodox Church in New Kensington, PA, an active member of the Garden Club of Natrona Heights, PA, Bridge clubs, Philoptochos, Civic Club, Chapter Icaros in Pittsburgh, and later Krikos Club in Ikaria. She will be dearly missed by all who knew her.