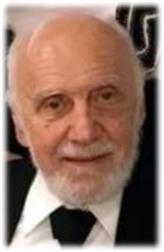 George Nicholas Kefalos of Oakland, PA, formerly of Edgewood, PA, born September 20, 1923, in Bridgeport, OH, passed away on Monday August 8, 2022. Preceded in death by his parents Nick and Vasilico (Amaxi) Kefalos, brother Cosmos and wife Ada Kefalos, and sister Mary Kefalos. George was also preceded in death by his beloved wife Katherine (Lardas). He is survived by his brother Anthony and wife Dolores Kefalos.

George attended Ohio State University where he studied electrical engineering and mathematics. There, he played football under coach Paul Brown.  Soon after George began his college career, he enlisted in the U.S Navy and served in the South Pacific during WWII as a Seaman First Class and ultimately served on USS LST 912 for two years. He was seasick his entire Pacific tour. After the war, he finished college and started his career in electrical engineering in Washington D.C.  Later, George moved to Pittsburgh for employment, and it was there that he met his wife, Katherine. They were married for 64 years. He was an avid tennis player at the Edgewood Club. He enjoyed watching all sports. George was a faithful parishioner at St. Nicholas Cathedral in Oakland, PA, and a lifelong member of Chapter Icaros 7 of the Pan-Icarian Brotherhood. But what he enjoyed most was being with his family and watching them grow. Many knew him as “Golden Papou”.